I’m no Anthony Bourdain, but since leaving radio in August 2016, 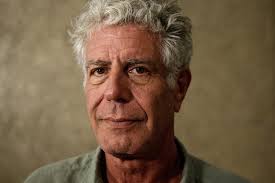 I have spent some of my spare time dancing again with my creativity and exploring alternative dishes with local, organic farmers. I’ve been trying new cuts of meat and  experimenting with dishes that use offal (animal organs) and other parts, like poultry feet.

Tony as my inspiration…

I made a decision after radio that I was going to get myself right, get my life right, once and for all, even though I know the work is never done. It took me awhile to work through the grief of the loss of the radio project and so I kept to myself. For a while, I chose a more reclusive way of existence although I did manage multiple part time jobs and limited social outings. But on reflecting on Anthony’s suicide, perhaps he could have used a little of this cocooning or perhaps sharing with a good friend, or maybe he thought that this was going to be his last creative endeavour. He didn’t look healthy in the last season of Parts Unknown. He looked like he had sold his artistic soul and was simply going through the motion on camera. But I’m only speculating based on his mannerism and looks and  scripted delivery and narration. I didn’t know him personally and only watched his CNN series after he had passed. I do know that highly creative people may look successful on the outside (everybody wants to be like them) but fighting demons on the inside. I wish I had met him. I choose Anthony Bourdain as my inspiration because whether he knew it or not, we both have adventurous spirits!

I wanted to be in the best possible condition…

I didn’t need to know where I was going. I just knew I wanted to feel better about myself and be prepared for the upcoming 3rd chapter of my life. I was diagnosed with osteoarthritis earlier this year with a bone on bone condition in my right hip. It meant walking with a limp, chronic pain and the possibility of walking with a cane and hip surgery in the near future. I wanted to be in the best condition possible for surgery. So, in addition to Feldenkrais once a week, physiotherapy every other week, and aquafit a couple of time per week, I wanted to reduce inflammation in my body while nourishing the remaining cartilage in my left hip and in my other joints. Thankfully, apart from some mild phlegm in my gut (and the hip-thingy), I was generally in good health, nice physical weight and good spirits.

Had to do some research…

I started doing research on the internet and discovered chicken feet was an excellent source of protein, calcium, and collagen (Whoooaaa! Collagen sent my bells a ringing. I needed more.).  Poultry feet were described as easier to digest than muscle due to the tendons, which made them even more appealing, to me anyway. I wanted to try a dish.

I’ve been health conscious for decades with no real culinary training, except by my mother’s hand, recipes and cooking tips, and what and how I experimented with dishes over the years.  Thirty years ago, I eliminated processed and fried foods from my diet. I cut out wheat, corn, cow dairy, sugar and salt, or found healthier alternatives. Anything white was gone! So, today, the discipline of choosing healthier is a little more ingrained, perhaps than with someone who is just starting to change their lifestyle.

Even today, I buy and eat local, organic and fresh foods as often as I can. I am predominantly vegetarian but consider myself a flexitarian. I will eat organic grass fed meat and poultry, along with seafood and fish from the Atlantic Coast. When I’m asked out for dinner or lunch, I don’t expect friends to change their meal plans to accommodate me.  I’ve been in situations where my choice of foods wasn’t available. No biggy! I discovered that the care I gave myself decades ago allows me some freedom to enjoy desserts, fish and chips, dark chocolate and even poutine, once in awhile.

I attended the local farmer’s market at Lansdowne Park in Ottawa and met Dorothy of Dorothy’s Ducks who raises free-range, pasture managed, organic grain-fed ducks, geese, chickens, turkeys, goats and lamb. She never gives her livestock hormones or antibiotics. Dorothy and I chatted about my little adventure and poultry feet, and I went on to purchase about 6 packages of feet, which were relatively inexpensive. I received approximately 8 feet per package, which I froze.

Once a week over the next 6 weeks, I would take out a package of feet and create something delicious to eat, usually as an easy soup, in my slow cooker (sometimes we forget about our handy slow cooker).

Here’s how my first attempt went…

After thawing, I washed the feet in salted water and rinsed well. I cheated at times with the purchase of 2 boxes of low sodium organic chicken broth. I lightly pan-fried sliced radishes, leeks, green onions celery and baby bok choy.

Here are some other ingredients I add (or not) to my chicken feet soup!

Salt and pepper to taste, some turmeric, cumin, a pinch of fresh thyme, sage, cilantro and a few bay leaves and …. Voila! So good!

The chicken feet in combination with vegetables, grains, herbs, low-sodium, locally grown organic ingredients, hit the jackpot in my books! Have fun with your ingredients!

Veggies delivered to your door: – https://www.mikesgardenharvest.com/

Note: I am simply sharing my experiences and some of the creative, wild things and boring things I do.  Cooking with ease with not yet mainstream ingredients is really fun… And a learning experience! Explore! Be adventurous!

This or any other blog I’ve posted, suggestions or comments does not substitute for the care of a professional dietitian or medical doctor. Photo of Anthony Bourdain by JL JAVIER for CNN. I forgot to take a selfie when I made my soups. Chicken feet photo is stock with no copyright. Credit to the photog, though! 🙂

About the Author: patricia