When I was growing up, my brothers and I would constantly argue as to who was going to get a window seat in the car. So, my Dad bought a monster of a station wagon, whereby we could all have a window seat somewhere in the car. 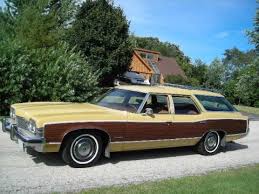 The Catalina was an interesting car. Not only was it longer than most station wagons of it’s time, but it had an automatic back window with rear-view seating.

Our big family outing in the Catalina was the drive-in theatre. At dusk, we would drive to a huge empty lot to watch a movie on a massive outdoor screen. Dad would parked the wagon along side dozens (if not a hundred) of others, and we’d sit in the car watching a Disney production, usually a double feature. Back then, movies ran on Kodak projectors and you could get into the drive-in for a flat rate per car. Some drive-ins would have two screens at opposite ends of the lot, catering to different films and viewing audiences.

The sound came from small metal speakers that were heavy, clunky and detachable. They hung on wooden posts at each parking space, and you had to remove one and rest it on the window of the driver’s side of the car to hear the movie. They weren’t reliable at the best of times, and the sound wasn’t the best, either. I can remember, on several occasions, Dad getting annoyed for having to move the car to find a speaker that worked.

Drive-in concession stands were an experience as well. They were more like outdoor shacks in the middle of the lot. And the line-ups were long, regardless of the weather.

On one occasion, we went to the drive-in to see 101 Dalmatians. After the car was parked, we got shuffled around in the car. My youngest brothers stayed on the middle seat, and Mike and I got the two-seater at the back of the wagon, until we started fighting. Mike then moved to the middle seat, and one of the younger boys was coaxed to the front with my parents.

Now, the two-seater at the very back of the wagon faced the opposing direction to the family movie. And although 101 Dalmatians was an ‘okay’ movie, we had seen it previously during a Disney Sunday night TV slot. So, I was bored. The boys had fallen asleep early, and my Dad was complaining to my Mom that the adults were the only ones awake watching a kids movie.

So, contrary to my mother’s explicit instructions to keep my eyes facing the front of the car, I pretended to be asleep. And with the automatic window down, I watched the movie on the opposite screen…. bad guys, good guys, provocative women, kissing, sex, cigarette smoking, and guns… real excitement at the other end of the lot! And although I couldn’t hear it, I’ll never forget it. It was my first ‘adult’ movie.

When the credits started to roll for 101 Dalmatians, my Dad burned out of the parking lot; grumbling and complaining to my Mom about the waste in going to a drive-in as a family with sleeping kids.

It wasn’t until we got home that I realized that my Dad had wanted to see a different movie, one that wasn’t child appropriate… some James Bond movie called, Diamonds Are Forever.

And although I didn’t see the end of my first dirty movie, or hear any of the soundtrack, I was delighted at my cleverness in sneaking my peek!