Patricia was the morning and afternoon news/traffic/weather girl for Ottawa’s DAWG-FM before moving to the weeknight syndicated Howlin’ Blues program and mid-day time slot, which she hosted for 5 years. During three consecutive rating periods, Patricia tripled the listening audience and expanded the age demographic in her time slots placing DAWG-FM within the three 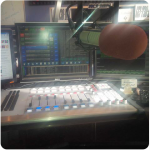 percentile – first ever for the station since its inception in 2010. From 2012 to 2016 her sexy blues prowess was heard late nights and Sundays on FreeFm 98.1 in Southern Ontario. In 2015 she became the backdrop of the afternoon drive home in the GTA on 105.5HitsFM.

“Patricia’s the real deal! A tremendous promoter and supporter of Canadian Blues artists. She’s a fabulous radio host and a delight to work with….”